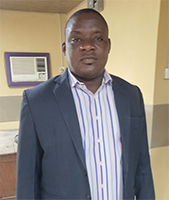 In a chat with our correspondent, the Chairman, Comrade Faola Olawale Olugbenga, praised the cordial and robust relationship with the Council Administration by his predecessors and pledged to maintain and build on it.

He described the Executive Chairman of Ajeromi Ifelodun Local Government, Hon. Fatai Adekunle Ayoola as a responsive and accommodating Leader. But, as unionists, Comrade Olugbenga; considers himself and his team as “Oliver Twists” who will always ask for more improvement in staff welfare.