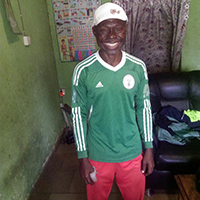 Veteran Grassroots Football Coach, Paul Okwudiri Nnakwe (a.k.a. Paale!) has lamented the declining fortunes of football at the grassroots. “You know in football, you need every motivation to rise. Some of these players, especially from the grassroots, there is nobody that comes out to encourage them”, he explained.

In an exclusive chart with GhettoLiFEtv, Coach Nwakwe who has natured several big name football talents out of Ajegunle, including the likes of FIFA-U17 World Cup Winner, Jonathan Akpoborie, Trabzonspor FC of Turkey and Super Eagles’ Tony Nwakaeme as well as Super Falcons Onome Ebi, among others, told the show, “In Ajegunle today, another thing I see as a problem in the development and picking out of talent is that we lack coaches.”

He called on the Nigerian Football Federation, NFF, to “do something because the grassroots is the foundation of football. And without the grassroots, you cannot grow.”